By Cecilia Gragnani |
Am I Italian? Have I become British? People who live abroad inhabit a sort of third space. In this episode we explore the feeling that many expats have described as being indefinitely suspended in between two cultures and countries, because peaceful coexistence with local communities is a daily conquest to be fought with all possible weapons, starting from irony and humour. 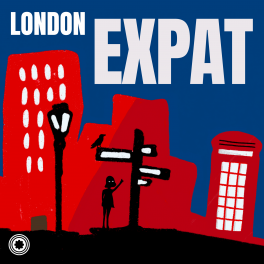 LONDON EXPAT is the comic story of the encounter between a modern migrant and London – a contemporary El Dorado for young Italians and Europeans. The podcast explores the long road to becoming a British citizen, embracing a new nationality whilst staying true to your roots, and the existential crisis that your identity faces when no country claims you as their own. Performer & British citizen Cecilia Gragnani, with the help of journalist Gabriele Carrer, will share what life in the UK looks like in Brexit times, as the European dream of life across borders slowly drifts away. In her exploration Cecilia interacts with the spirit of London, interpreted by the Drag Queen Jonny Woo, and uses as a guideline the book “Life in the UK”, a compulsory read for aspiring citizens but little known even by the native English people. The story is accompanied by direct testimonies of many expats who have tried, have succeeded or have given up.